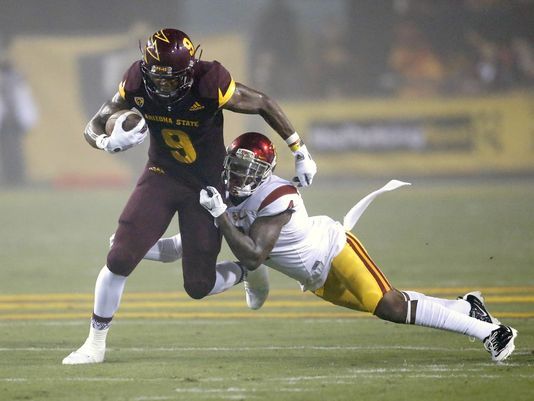 There’s not another back in the 2018 class that has as little production with as many physical tools as Kalen Ballage. He is big, he’s fast, he’s strong, and he is a point of contention among dynasty circles.

Ballage can catch; everyone can agree on that. He might not be built like a prototypical scat-back, but there’s little doubt Ballage can be an asset in the passing game. He has very smooth hands, easily adjusts to poorly thrown or tipped passes, and is effective once he’s got the ball in space. His 6’1 228 pound frame, coupled with mid-4.4 speed, creates mismatches whether Ballage comes out of the backfield or if he is split out wide. As a runner, Ballage is best suited to attacking the middle of defenses; he is very strong and when he’s running downhill, his speed is evident.

Where Ballage breaks down as a runner is when he’s asked to move laterally. Ballage’s cuts can be stiff and unnatural, and he sometimes appears to be a tight end moonlighting as a running back. He was repeatedly unable to get to the edge to be an effective outside runner. Ballage also struggles to get his pad level low enough to beat a defender without losing leverage. (To be fair, part of that is just Ballage being so tall.) Unfortunately, he doesn’t utilize his size when blocking; instead he makes himself small and often misses blocks low.

Scouting Kalen Ballage is like looking to buy a house and stumbling upon one “with good bones.” Some people are able to imagine the beauty of the finished project, while others can’t look past the shag carpet and peeling paint. With a little TLC, (and a landing spot with a coach who can scheme to his skillset), Kalen Ballage has upside.